LESSONS LEARNED
In 2009, Evergreen Brick Works, the current occupant of Toronto’s historic Don Valley Brick Works, stood out from 610 candidates around the world, became one of the 10 finalists of the Geotourism Challenge – a competition sponsored by National Geographic and Ashoka Changemakers in search for good example of tourism that “sustain or enhance the geographic characteristics of the place[1]”. In its competition profile, Evergreen Brick Works presented itself as a hub for sustainable innovation and education with an emphasis on cultural heritage, natural rehabilitation and community involvement. All of the above are truthful descriptions of Evergreen expect for missing one significant characteristic of the site – its unique geologic heritage.  The industrial activities during the brick making years in the 20th century had gradually removed the rocks and sand sediments of the site, revealed the stratum and fossils that carries valuable information about the geological history and climate pattern of the region.  The site presents an unique scenario where the negative environmental impact of an invasive industrial activity gave rise to valuable resources for environmental study that might produce positive impact in the future. Therefore it’s not unreasonable to conclude that the geologic feature of the Don Valley Quarry is related closely with the sustainable theme celebrated by the Evergreen Brick Works. However, it’s rare to see both subjects discuss at the same time in the media since most of the spotlight was given to the adaptive and reuse project of the industrial remains. The site of Don Valley Brick Works, with its complexity, creates excellent opportunity for interdisciplinary discussion. A more holistic interpretation of the site with respect to all aspects of its heritage needs to be developed. 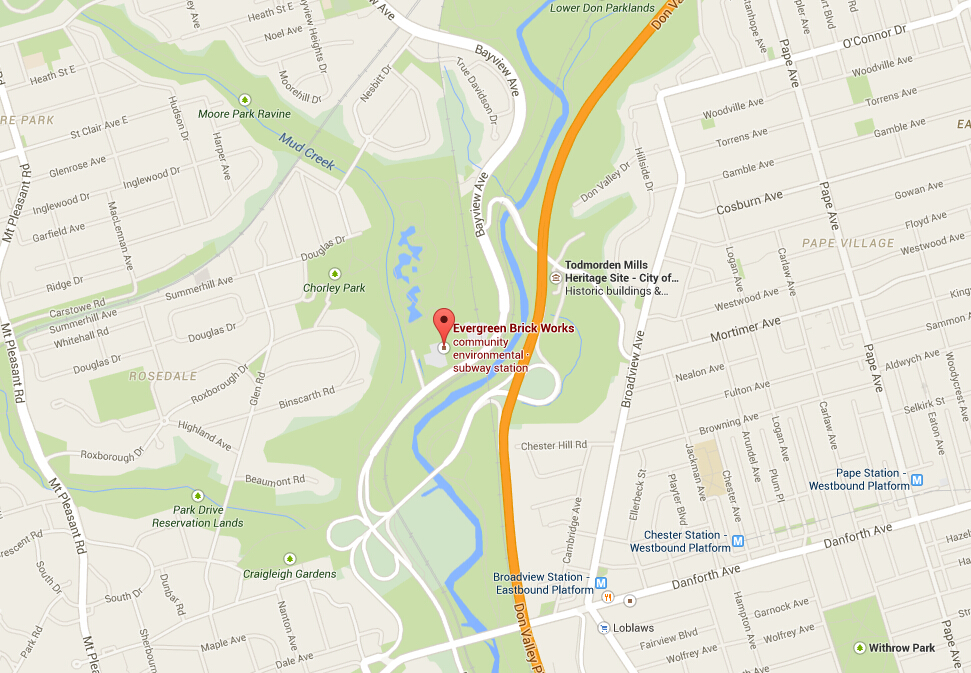 The Don Valley Brick Works is located in the Don River Valley north-east of downtown Toronto, flanked by the Mud Creek and the Don Valley Parkway. The site consists a total of 16.4 hectares of land. Historic factory buildings occupied 4.9 hectares at the south tip of the site, while the rest is the quarry pit.

Under the Master Plan developed jointly by the E.R.A. Architects and Evergreen, the industrial remains became a multi-program center with space dedicated to exhibition, art, food and recreation[2]. The quarry had turned into a garden through natural rehabilitation, reintroduced local species back to the land. The garden features natural filtration ponds (1), wildflower meadow (7), Carolinian Woodland community (8) and deciduous woodland slope (11), all linked by trails. The perimeter of the site is accentuated by the 80-ft high slope at the north (2) and west (10) end.

The site of Don Valley Brick Works has been studied extensively for architectural adapt and reuse as well as natural rehabilitation. Hence this case study will be focused primarily on the geologic heritage – how is it protected and presented.

TIMELINE
The following section presents the timeline of Don Valley Bricks Work from three aspects in order to provide a holistic understanding of the evolution of the site. 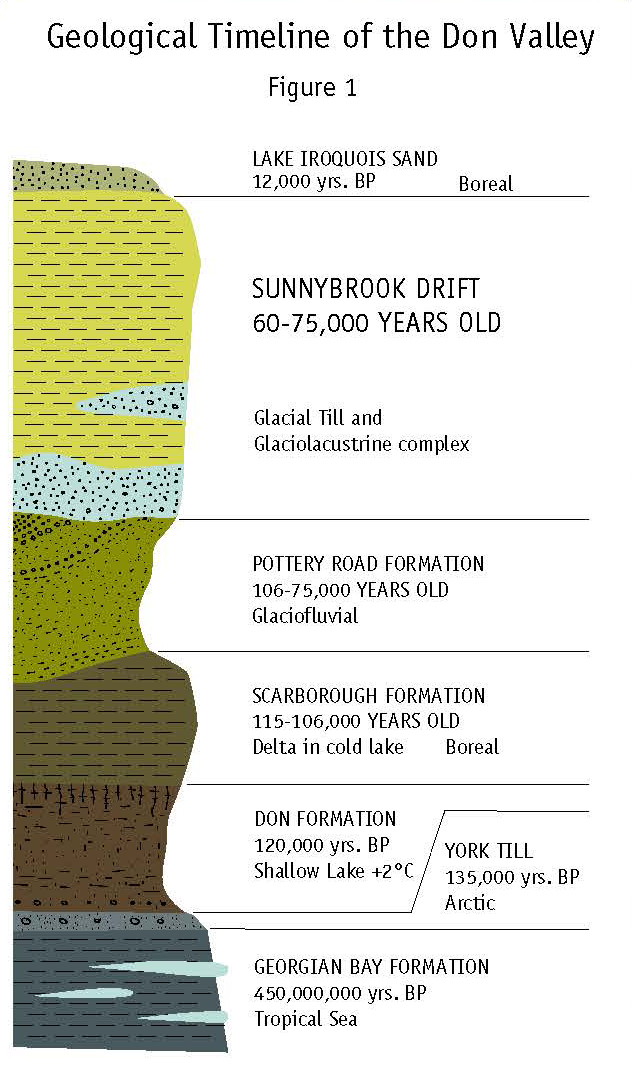 The natural heritage of the site is strongly associate with the industrial usage of the land. According to Jennifer Foster of York University, “As clay for the bricks was gradually removed over the century-long excavation, a stunning geological and fossil record was revealed that provides a rare record of a sequence of climatic changes.[6]” The geologic significant of the Don Valley Quarry is academically recognized and internationally acclaimed in the field of geology. The North Slope is one of the few sites around the world where a complete set of stratum can be easily accessed and studied. The West Slope is rich in fossil deposit. Geologist A.P. Coleman was among the first group of scholars who shown interest to the site. Through the many works of Coleman, and others, the Brick Works sections were well studied for over 40 years since the end of the 19th century [7]. In 1983, Don The Don Valley Brick Works was designated by the Ontario Ministry of Natural Resource as a Area of Natural and Scientific Interest.

The sustainable theme of the geologic heritage of the Don Valley Brick Works is best manifested through the education programs developed and offered by Evergreen[8], City of Toronto[9] as well as other private parties[10]. The tours were carried out through the spring and summer time of the years, leaded by local historians and geologists. A wide selection of topics were discussed, ranging from basic geology to brick making process. The site visit allowed the participants to have first hand contact with the material of study, provided an easy introduction to some abstruse subjects such as earth history and climate change. Those educational programs ensure the longevity of the geologic heritage through active promotion of its value as well as interdisciplinary discussion.

However, tours can have possible negative impact over the integrity of the geologic heritage. The correlation between human activities and the erosion of slope had been made by Evergreen in its 2006 Master Plan, then AMEC Earth & Environmental’s on Valley Brick Works Park: Natural Heritage Impact Study and Enhancement Strategy in 2007. In order to maximize the positive impact of the educational programs and achieve true sustainability, proper assessment is necessary for evaluate the impact of tourism over the geology heritage. Mitigation strategies such as fencing, designed route and proper signage should be implemented where necessary to restrict access in the area of protection, at the same time provide better control of human activities on site.

MEASUREMENT
The Don Valley Brick Works was designed by the Ontario Ministry of Natural Resource (MNR) as a Area of Natural and Scientific Interest (ANSI). ANSI is an Ontario designation defined as “areas of land and water containing natural landscape or features that have been identified as having life science or earth science values related to protection, scientific study or education.“[11] A site can be designed as either life science ANSI or earth science ANSI. The former showcases representative biodiversity and natural landscape of the province, while the latter contains significant geologic features such as bedrock, fossils and landforms. MNR uses the following five criteria to evaluate a site’s eligibility for the ANSI designation[12]:

Once the site is designed, it is entitled to the protection stated in the Natural Heritage Policies of the Provincial Policy Statement. A buffer zone of 120m for life science ANSIs and 50m for earth science ANSIs is recommended to ensure the minimal disturbance to the protected area[13]. Development and site alternation is forbidden in both ANSIs and its buffer zone, unless the proposal is proven to have no negative impact on the nature features or the ecological functions of the site. The policy also introduced fencing as a mitigation tool for controlling public access [14]. 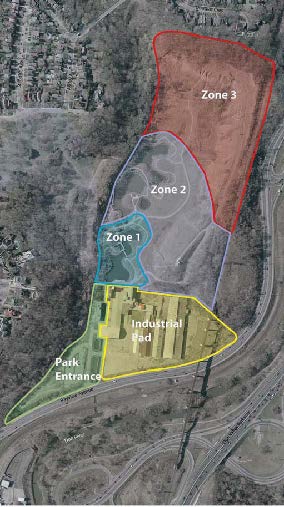 Zoning Plan proposed in the Master Plan of 2006, Copyright of Evergreen

In the Master Plan of 2006, recommendations were made to TRCA by Evergreen in respect to the site’s ANSI designation. Five zones were established with different level of accessibility. The Parking entrance and the Industrial Pad remained most accessible throughout the site while Zone 3 was the most restricted and should not be accessed by visitors. Certain activities such as biking and off-leash dog walking should be eliminated due to their high ecological impact. The Natural Heritage Impact Study and Enhancement Strategy completed in 2007 confirmed the correlation between human activities and slope erosion.

In reality, little was done according to the recommendation. The park continue to function primarily as an dog walking park [15].  Without proper signage and fencing, both north and west slopes can be easy access from above and below, attract curious visitors who wish to explore the “off trail route” as well as local mountain hikers.