LESSONS LEARNED: The Benny Farm housing project is a complex story spanning almost 70 years. Programmatically it has changed only slightly; established as social housing for veterans, the nature of those serviced expanded to include single-parent and low-income families, seniors and physically disabled individuals. In 2004, it became the location of a large, award‑winning, green urbanism project. This case study focuses on that large-scale redevelopment from uncertain conversations in 1998 to construction between 2004 and 2007. As architect Daniel Pearl (2015) refers to Benny Farm as “the world’s first government‑subsidized, large-scale, community-driven neighborhood renewal project combining affordability, green building technologies, rehabilitation, and new construction,” (p. 13) this case study focuses on two key themes: environmental sustainability and social sustainability. In reusing some of the extant buildings, Benny Farm stands as a strong example of the effectiveness of adaptive reuse and material reclamation in mitigating the waste generated through development. It is also important to note that Benny farm illustrates the impact integrated renewable energy systems can make on the economic viability and sustainability of a project.

As important as the environmental considerations are, maintaining a strong community has played a key role in the ongoing survival of Benny Farm. Community groups like Heart and Hands have been operating in the community since the 1970s and its members were instrumental in developing the contemporary coop programs, like Coopérative d’Habitation Benny Farm/Benny Farm non-profit housing cooperative, Coopérative d’Habitation ZOO (Zone of Opportunity)/ZOO Non-Profit Housing Cooperative and Chez Soi, that operate on the site today. These community groups and others from surrounding neighborhoods were directly involved in planning the redevelopment. This illustrates the effectiveness of community activism and initiatives but also illuminates the features that residents see as increasing the livability and sustainability of their communities, including community gardens and low-speed, heavily treed streetscapes. Finally, a community or resident perspective helps offer a more robust assessment of the effectiveness of a project surrounded with sensationalized and overly positive media attention and discourse. The community viewpoint helps shows that award‑winning planning does not always translate to award‑winning execution.

DESCRIPTION: Benny Farm is a 7.3-hectare (18 acre) housing property in Montreal’s west-end Côte-des-Neiges/Notre-Dame-de-Grâce (Notre-Dame-de-Grâce (NDG) before 2002) municipality. Designed by architect Harold James Doran, it was developed beginning in 1944 and constructed in 1946 to house veterans returning from World War II. Originally on the outskirts of Montreal, as the city grew, the site found itself on a much more desirable and valuable piece of land (Baker, 1998, p. 28). This made the development of the property highly contentious and often political.

Through the 1990s while under the ownership of the Canada Mortgage and Housing Company (CMHC), at least three redevelopment proposals were undertaken, with scopes ranging from a complete demolition of all buildings on site in 1992, to a plan that proposed the complete conservation of all existing buildings introduced by the architectural firm L’OEUF in 1994. Finally, in 1998, while still under CMHC ownership, permission was granted to demolish the entire site (Baker, 1998, p. 28). This permission and date also marks the beginning of this case study’s focus. In 1998, in response to the demolition approval architect and community activist Joseph Baker wrote,

“Scandal is not too strong a word for the unjustifiable and imminent destruction of a valuable public resource. To date the Federal Minister responsible for the CMHC has turned a deaf ear to all representation, while the Quebec government has lent a sympathetic one but is powerless to intervene in a jurisdiction not yet its own” (Baker, p. 29)

Ownership changed hands the following year with the site being purchased by the Canada Lands Company (CLC). Discussions were undertaken between the CLC and local organizations as the Benny Farm Round Table with a community group, the Fond Foncier Communautaire Benny Farm (FFCBF)/Community Land Trust Benny Farm emerging from these meetings. After a questionable (Baker, 2003, p.1), failed deal (van Drimmelen, 2007, p. 6) with the newly formed Land Trust, CLC undertook a site redevelopment plan with themselves as the principal developer (Baker, 2003, p 1). In 2002 after more than a decade of citizen advocacy and in service of a more participatory design process, CLC formed a task force of representatives from variety of stakeholder groups (Yilmaz, 2008, p. 1370). After a design competition was held, a plan was chosen that retained 40% of the original buildings along Cavendish Blvd. and created 60% new construction.

Beginning in 2004, this project relied on a combination of multiple construction approaches and the installation of innovative green systems to provide dense, affordable but ultimately safe and comfortable rental units for at least three co-operative organizations. These three organizations and their corresponding three buildings occupy the east side of Cavendish Blvd. as can be seen in the illustration below. 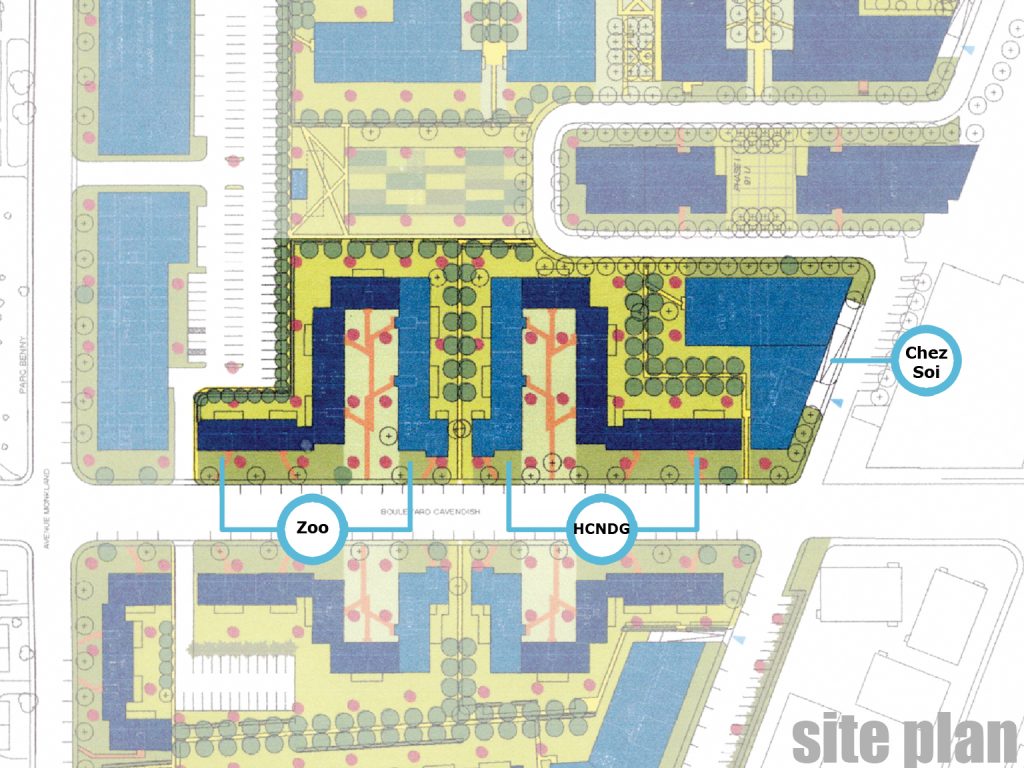 CULTURAL HERITAGE: Benny Farm had in the past been characterized as having little or no historical or heritage value (Fish, 1994, p.2; Baker, 1998, p.29). In 1992, coinciding with the early CMHC attempt to demolish the site, Montreal’s “Master Plan” was released. The plan (see below)  highlighted neighborhoods and areas that held varying levels of heritage value. Benny Farm was left entirely blank (Fish, 1994, p. 2).

Near the end of the 1990s when CMHC was once again pushing to demolish, their heritage consultant wrote, “the Benny Farm buildings are not of sufficient historical, architectural, urbanistic or environmental interest to justify conservation as a heritage property” (Baker, 1998, p. 29). This opinion of an absence of heritage value arose again with Montreal’s 2002 “Master Plan,” and once again, though bordered to the east and west by areas of “exceptional value,” Benny Farm remained entirely blank (Benny Farm site circled for the purpose of this case study). 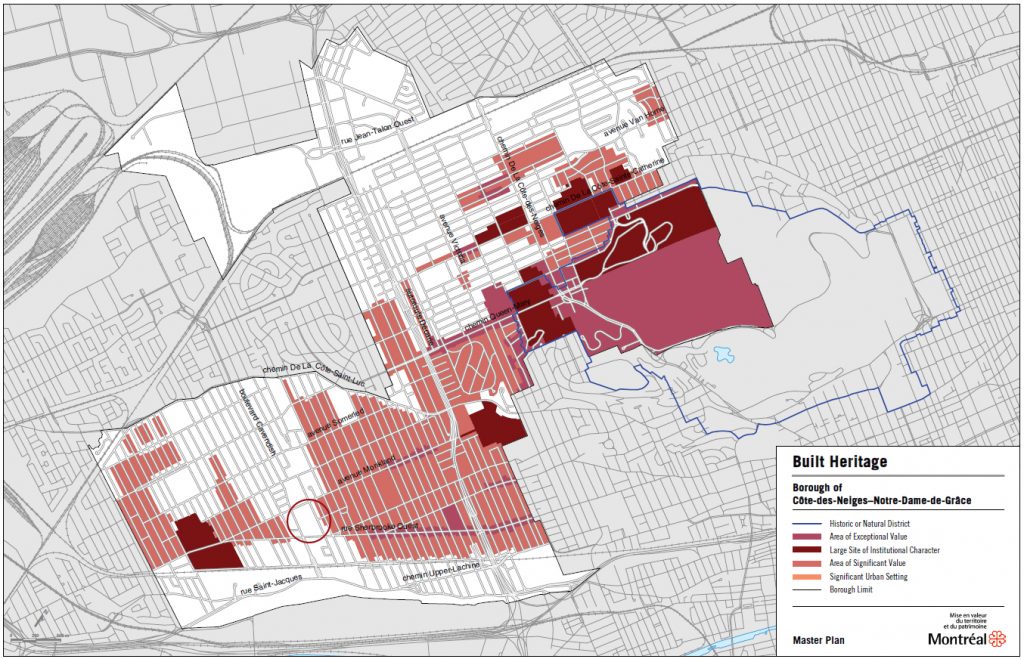 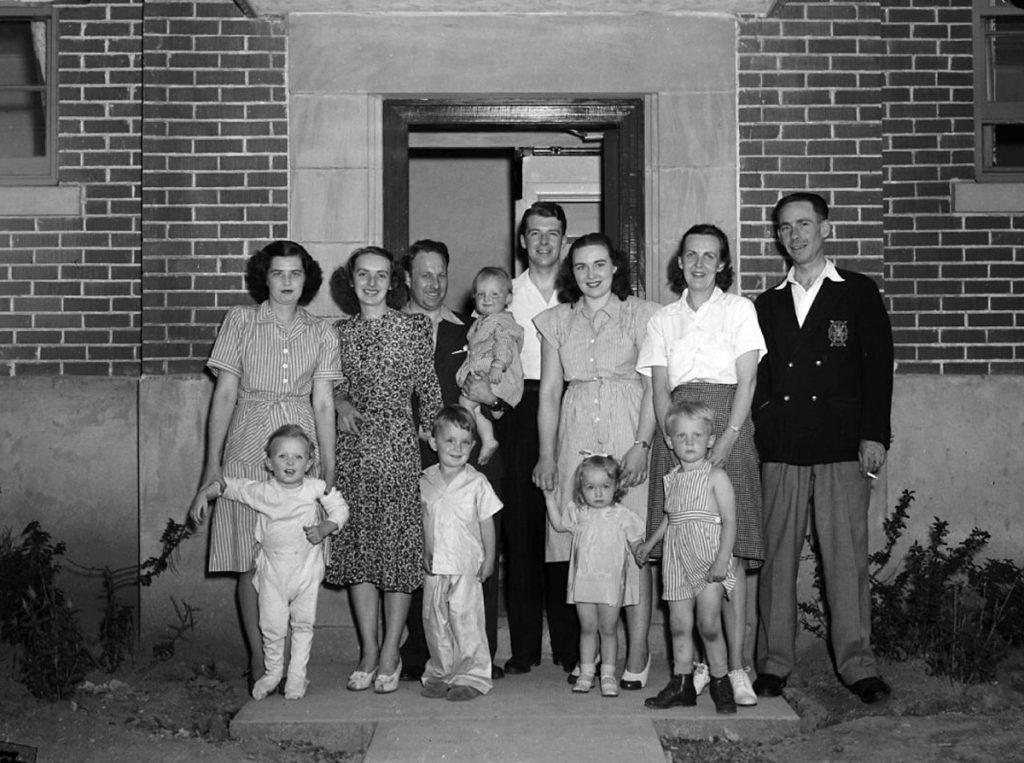 Architects like Joseph Baker have contradicted this absence of heritage value, citing Benny Farm as being an “expression of our society,” also noting that “perhaps it would serve to remember, with more than poppies on our lapels each November, how we faced up to our responsibilities to those who served” (Baker, 1998, p. 29.) Baker identifies the connection between Benny Farm’s original social housing purpose and Canada’s involvement in WWII as the “cultural context of our built stock,” following an idea proposed by historian and planner Jean-Claude Marsan (Baker, 1998, p. 29). 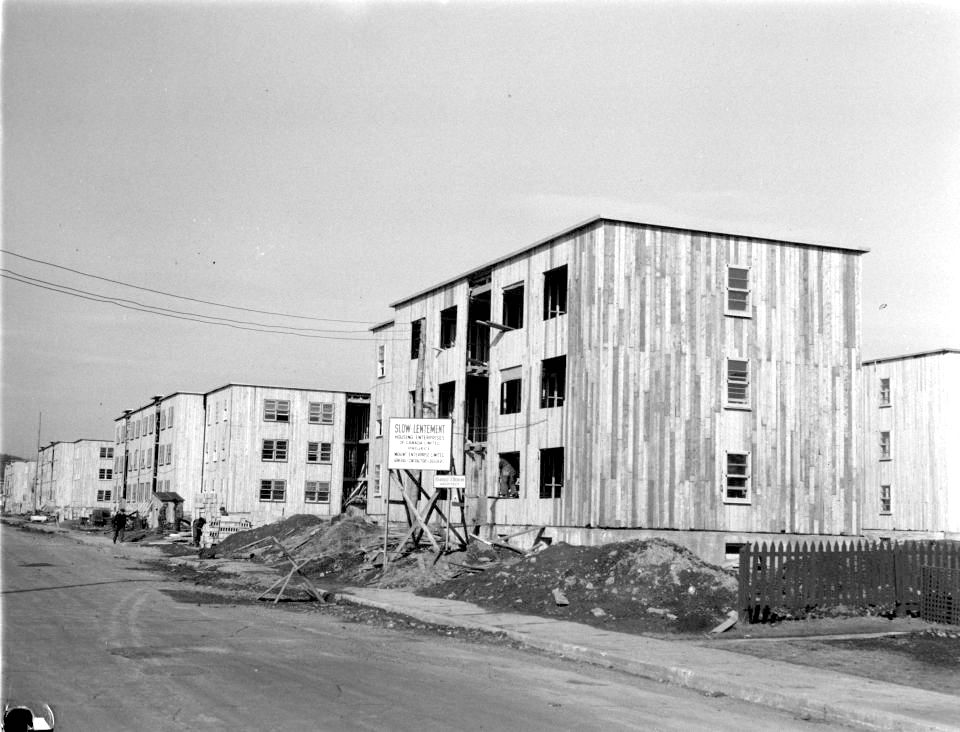 Benny Farm’s built environment also has ties to the ‘Amsterdam School’ style of architecture (Baker, 1998, p. 29), which had emerged in the Netherlands in the early twentieth century. This can be seen in the humble, but expertly applied art deco-styled brickwork and the artistic use of glass blocks. Further, its urban planning was inspired by the “Garden City Movement” (Baker, 1998, p. 29) theorized by Ebenezer Howard in his 1898 book To-morrow: A Peaceful Path to Real Reform.

“in this tradition it was a brave vision that offered the returning servicemen, a healthy, spacious environment in which to raise their families (Baker, 2003, p. 2).

Benny Farm’s contribution to Montreal’s exemplary built heritage is embodied in these ties to Canada’s militaristic history and in the well-constructed buildings holding deeper ties to a wider architectural discourse. It is also easy to see how these ideas were maintained in the Benny Farm redevelopment expanded on below. 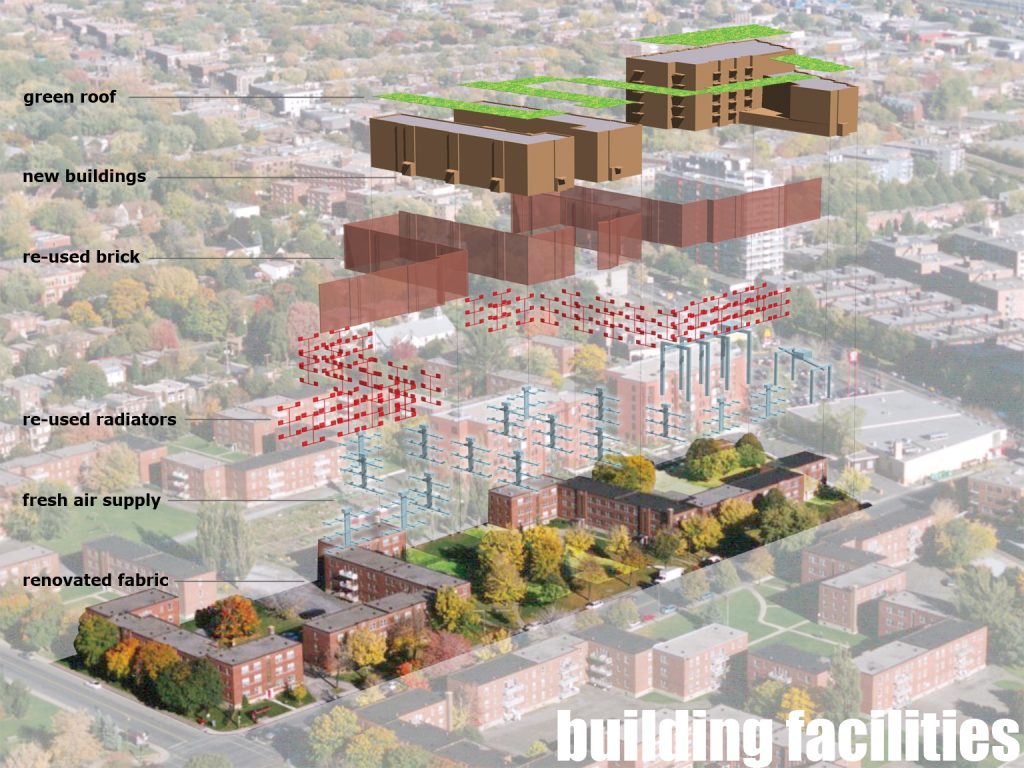 Sustainable materials: The building strategy behind Benny Farm addressed environmental sustainability concerns in several ways. First, through the materiality. The project involved the reconditioning and reuse of some of the original 1940s building stock, the project capitalized on the high-quality materials used in the original project including the plank hardwood floors, thick spruce sub-flooring, pine doors and cabinets and interior double layer gypsum board partitions (Baker). The amount of waste generated by the partial demolition and subsequent renovation of several of the buildings on site was also mitigated by the reclamation and reuse of materials. 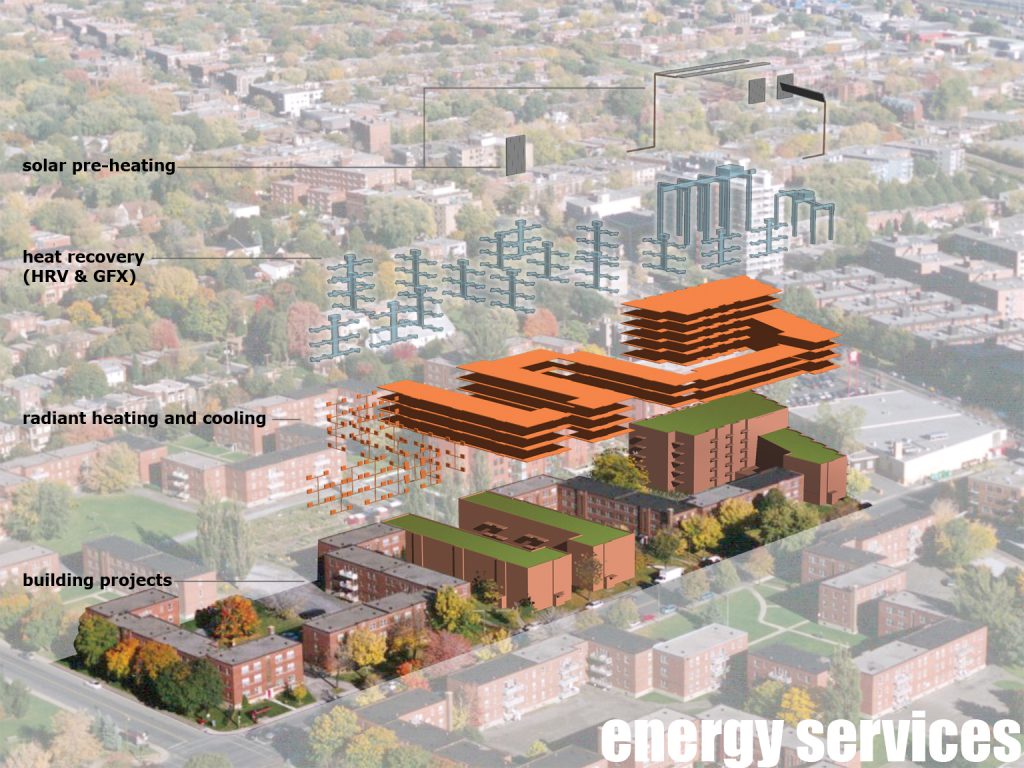 Renewable Energy: Starting at their core, the renovated buildings were to receive structural upgrades to accommodate the proposed new loads of a green roof, but also to future proof for later adjustment and expansion. This involved stripping roofs down to their rafters and installing rigid insulation and an air barrier to improve the building’s overall thermal performance. The process of conversion to a green roof was scrapped due to both technological and financial limitations (CMHC, 2006, p.2). 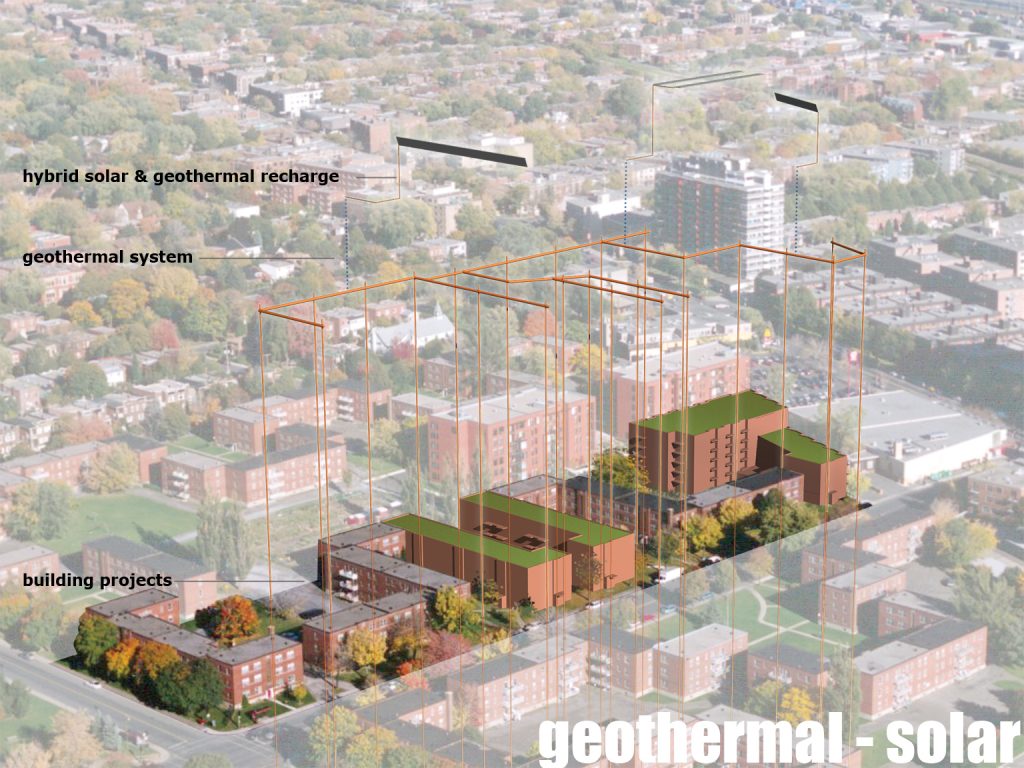 Benny farm utilizes both geothermal and solar energy in its heating system. This includes roof mounted evacuated tube solar panels and a solar wall; it also involves geothermal wells bored on the property to a depth of about 200m (Lafarge Holcim, 2006, p. 4; Pearl, p. 43). This energy is then transported through all three buildings through an integrated community energy system. To run the operation, a non-profit, community-run utility company called Green Energy Benny farm was developed (Pearl, p. 41). 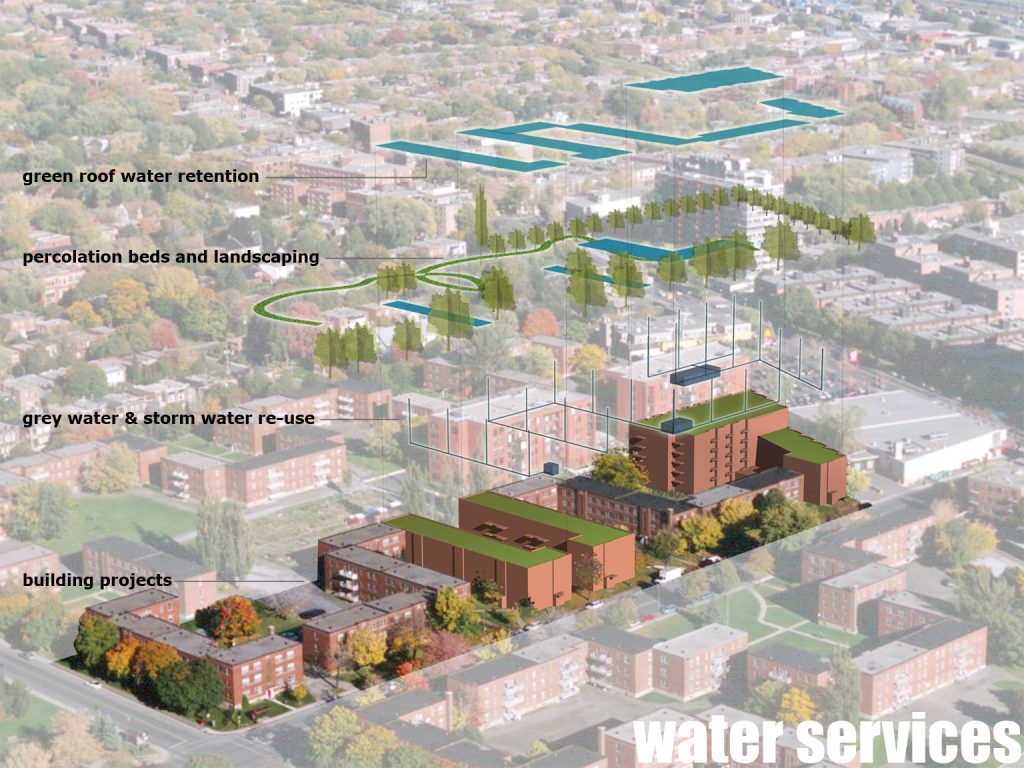 Finally, water is also considered a finite resource in the redevelopment. Aside from all fixtures being replaced with efficient, low-flow heads and taps (innovative building), and toilets, with low-flow units (CMHC, 2006, p. 1), sustainable water systems were installed, including: a storm water retention system, and percolation beds for the extensive gardens and grey water retention (Lafarge Holcim, 2006, p. 4; Pearl, p. 43). 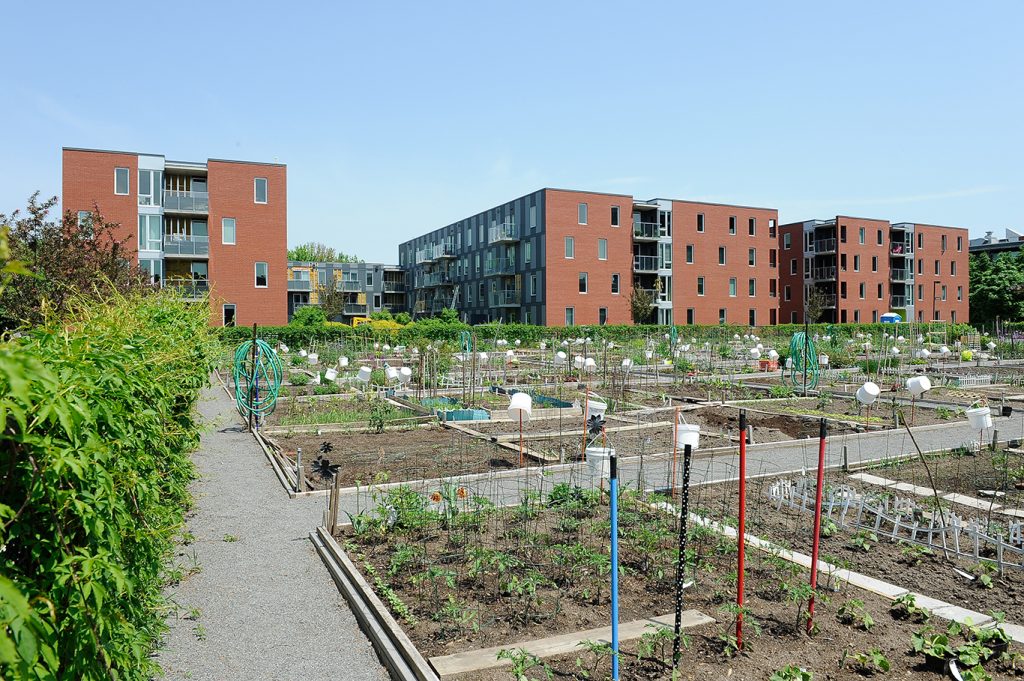 A key factor in Benny Farm’s social sustainability is in its continued support of social housing. Over 200 of the units in the redevelopment are operated co-operatives and other non-profits that target groups who are most vulnerable in relation to shelter and other services. (CLC, 2003, p. 9)

Benny Farm and residents of the larger NDG neighbourhood have a long history with the ‘green landscape’ and the act of community gardening. Many of the young mothers living in Benny Farm in the 1990s were participating in the community-run Friendship Garden behind NDG’s Wesley United Church (Moatasim, 2005, p. 76-77). Community gardens foster a sense of community and facilitate friendships (Moatasim, p. 77). Hence, a community garden became an integral feature of Benny Farm’s redevelopment and landscape design. The gardens and green-spaces were created by landscape architecture firm Claude Cormier and Associates and retained many of the original Garden City ideals, by creating large, lush, green common areas and many tree and bench-lined, walkways. Within the general objectives of the CLC redevelopment plan, several elements were developed entirely in service of livability and social sustainability. Housing distribution was planned in a way that located seniors and veterans homes together to promote a quite zone and sharing of services (CLC, 2003, p. 8). Conditions put in place to respect the neighbourhood included height limits on the buildings that faced the smaller residential lots on the streets surrounding Benny Farm.

MEASUREMENT: The Lafarge Holcim Foundation was created in 2003 to contribute to and help facilitate sustainable construction practices. They do so through publications, but most notably through their regional and international sustainable construction competitions. In 2005, the “Greening the Infrastructure at Benny Farm” project won Gold at Holcim’s regional level, later taking Bronze in the global competition. The criteria Lafarge Holcim uses to assess competition entrants thus offers a framework for measuring the effectiveness of Benny Farm’s sustainability efforts. The selection criteria are broken down into five pairs, with many sections interrelating or overlapping: “Innovation and Transferability”, “Ethical Standards and Social Inclusion”, “Resource and Environmental”, “Economic Viability and Compatibility” and finally, “Contextual and Aesthetic Impact”. Lafarge Holcim also refers to these five sections as 5 ‘p’s: progress, people, planet, prosperity and place.