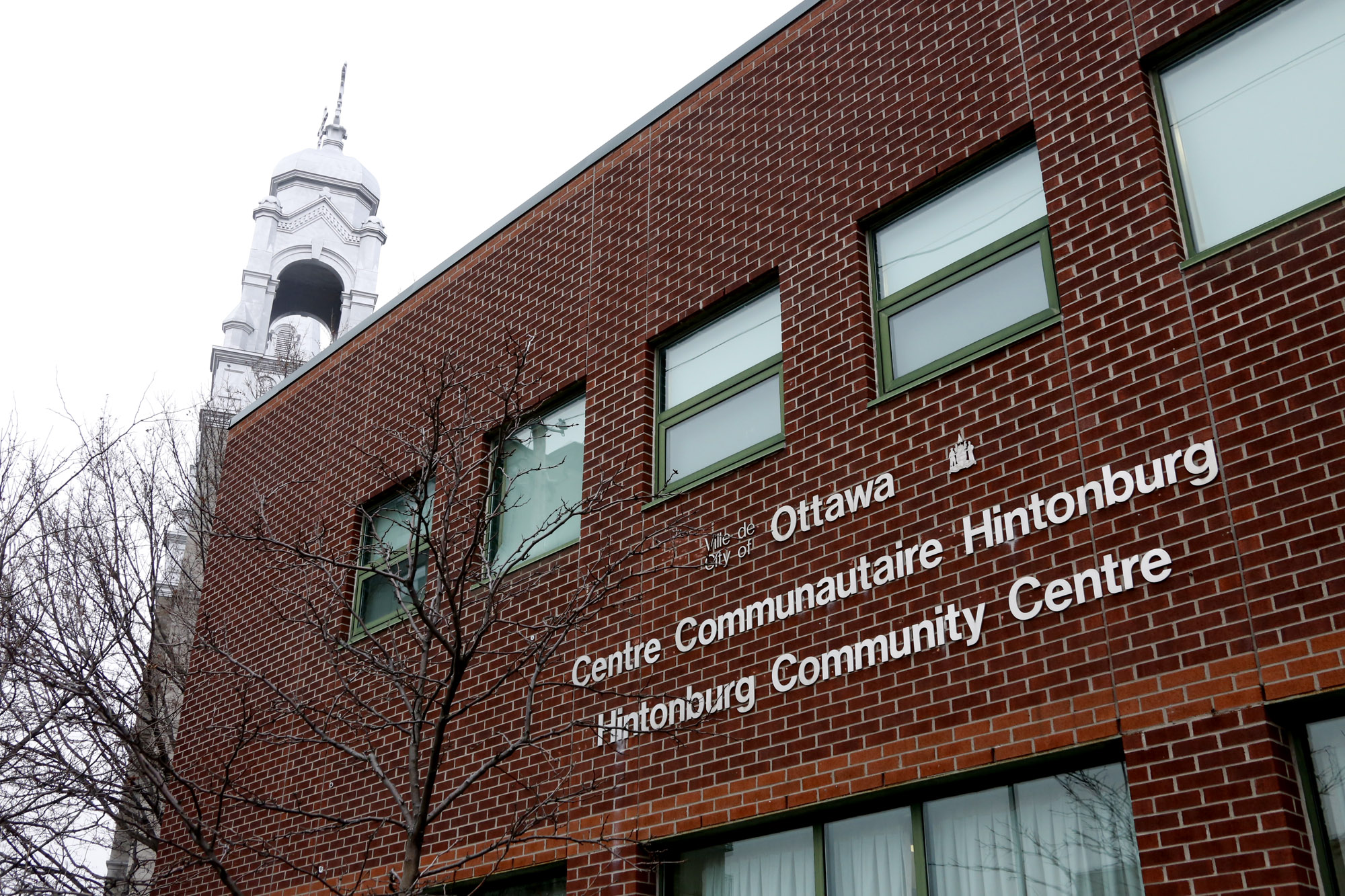 After a fifty-year period of economic uncertainty, high crime rates, and marginalization, the Hintonburg neighbourhood has demonstrated that it is possible for a community to regenerate itself. Members of the community took an active position in the creation of a Neighbourhood Plan and a Community Design Plan to address their concerns about the neighbourhood. The Hintonburg/Mechanicsville Neighbourhood Plan was developed through public consultations beginning in 2006, and was completed in 2010, in a collaborative effort between the City of Ottawa and the Hintonburg Community Association. The Plan focused on making Hintonburg a sustainable community, and made many recommendations for how to do so, incorporating environmental, socio-economic, and cultural considerations. The Wellington Street West Community Design Plan was approved in 2013, three years after the Neighbourhood Plan. It contains parallels and progressions on the themes found in the Neighbourhood Plan, and it provides a framework for achieving community goals through planning.

Based on various measurement tools, Hintonburg has regenerated into a sustainable, walkable community. It is now an up-and-coming neighbourhood west of Ottawa’s downtown core. The neighbourhood is filled with diverse young families and couples, with a growing commercial district on Wellington Street West, and intensification occurring throughout the residential areas on either side of this main artery.

The area is centred on Wellington Street West, and bordered by Scott Street in the north, the Queensway on the south, the O-Train line on the east and Holland Avenue on the West. At times, the neighbourhood is split into North and South Hintonburg, with Wellington Street as the dividing line.[i] 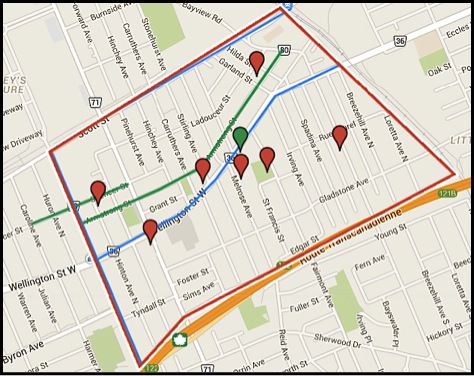 Community members created the Hintonburg Community Association (HCA) in 1991. Initially, the HCA intended to monitor the development applications coming into the community. However, “[t]he founding members learned that… residents were concerned about rising crime rates and prostitution.” The HCA “has established a reputation among developers and city staff for fair consideration of proposals that fit the neighbourhood and fierce opposition to those who do not.” It has also developed social programs to improve crime rates. More recently, the association has collaborated with various groups to turn Hintonburg into an art and culture centre, encouraging independent artists and businesses in the region. Hintonburg is now viewed as a trendy, friendly, and accessible neighbourhood.[iii]

Hintonburg is a neighbourhood of the City of Ottawa. As such, it is subject to development, policy, and management decisions made by the City, including the Official Plan, the Greenspace Master Plan, and the Cycling Plan, among others.

The Wellington West BIA is heavily involved in regenerating the community. It was created by community businesses in 2008 as part of the City of Ottawa’s Wellington Street West reconstruction project. The BIA works with business owners and community members to create a vibrant main street for the Hintonburg and Wellington West communities.

The Hintonburg/Mechanicsville Neighbourhood Plan (NP) began in 2006 with a series of public consultations with the community to determine the needs, issues, and successes in the neighbourhood. The NP puts emphasis on the creation of a sustainable community, through the improvement of environmental, socio-economic, and cultural aspects of the area. The Wellington Street West Community Design Plan (CDP) was approved in 2013, three years after the NP was approved, and contains parallels and progressions on the themes found in the NP. Both the NP and CDP are examined in detail below.

The community wants to encourage new development in the area, while maintaining its defining characteristics. The NP addresses environmental concerns such as improving green space access, quality, and safety, and instituting a replanting plan for when trees die. The community also wants to make the area more cycle- and pedestrian-friendly. It addresses socio-economic concerns by ensuring the continuity of existing social amenities and institutions, as well as by attracting new amenities and a diverse group of commercial businesses. The NP details cultural concerns including maintaining and expanding the arts initiatives, while encouraging the re-use of existing buildings and the design of new ones for arts and cultural usage. Additionally, promotion is highlighted as an essential need.

The CDP includes the concerns identified in the NP by creating a framework for the City and for the community to address them, through development and planning policy.

The heritage value of Hintonburg lies in its origins as one of the earliest industrial settlements in the area. The mix of residents, from mill workers and labourers to judges and civil servants, and their linguistic and religious diversity (French and Irish Roman Catholics, British Protestants), created a neighbourhood that is rich in different services, industries, businesses, churches and architectural styles. It is situated south of the Ottawa River, however the Sir John A. Macdonald Parkway has cut off access to the water. There are six heritage-designated properties within the Hintonburg neighbourhood. 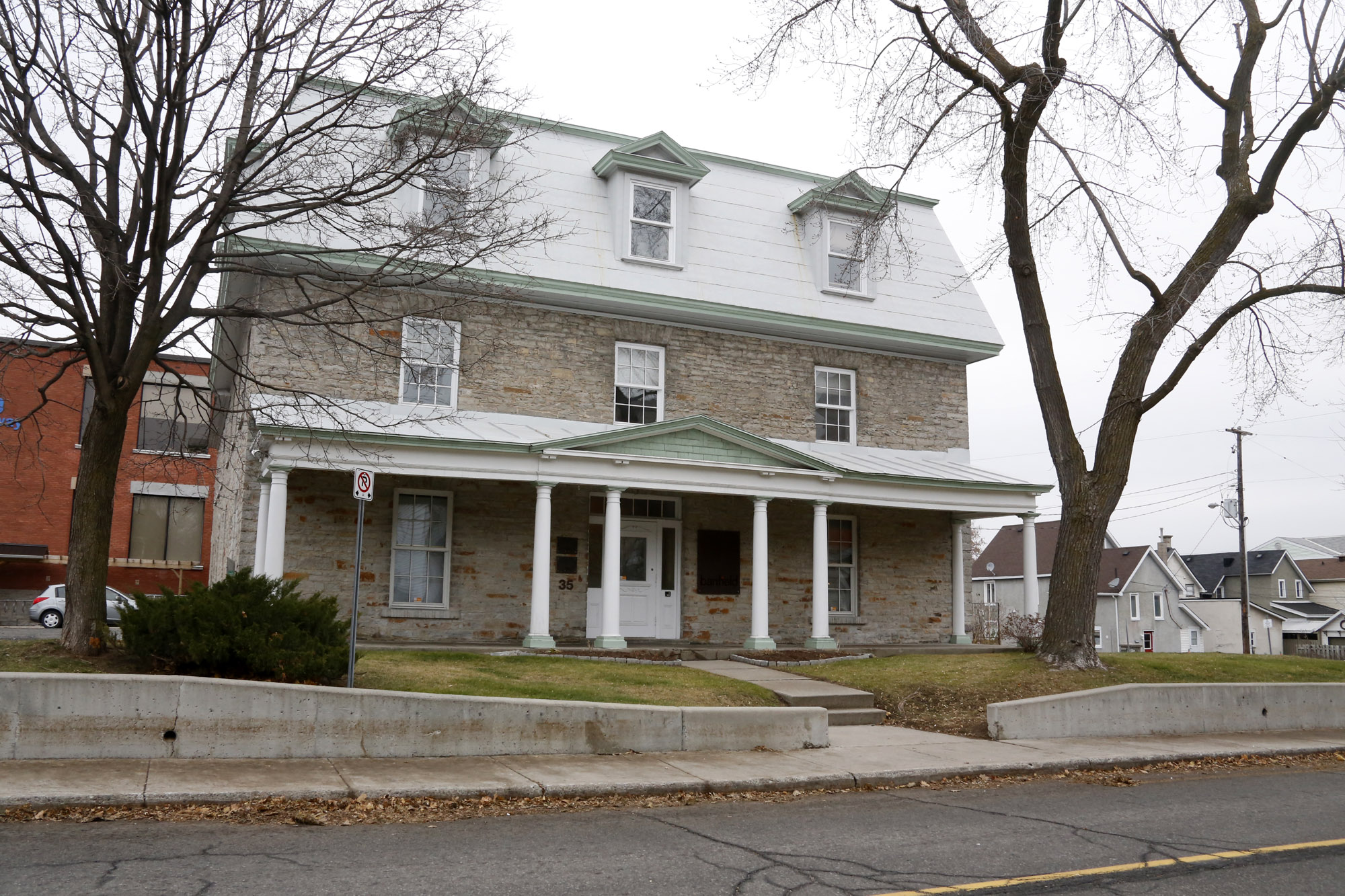 One of the earliest estates built in Hintonburg, Armstrong House was designated as heritage property in 1976 (35 Armstrong Street). Photo: Stephanie Elliott 2014.

Environmental Sustainability: There are two main environmental sustainability issues that the Neighbourhood Plan addresses: a commitment to improving public green space and making the community less car-dependent. The first issue is outlined in the NP section entitled “The Green Infrastructure.” This section aims “[to] protect, maintain and … expand green spaces and tree plantings.” There are six parks in the area, which all have one or more problems relating to security and maintenance. Infrastructure is also lacking, such as outdoor furniture and art installations. Only 5% of the Hintonburg area is currently used for Recreation/Open Space. Parkdale Park makes up most of this, and nearly all of the parks are located close to Wellington. “In general, the community is adequately served by the number, size and location of the parks.” Similar issues of security and accessibility are raised here as in the NP.

“Navigating Neighbourhood and City” and “Community Safety and Security” in the NP address walkability and cycling.[v]  The former states that “[a]rea residents place an emphasis on walking, cycling, and transit use as preferred modes of travel,” and this section aims to increase this tendency. To do so, bike lanes and better pedestrian crosswalks are needed in the area. Community safety is a high priority for many residents. Better infrastructure, such as bike racks and signage, is needed to welcome the use of lower-carbon transportation.[vi] 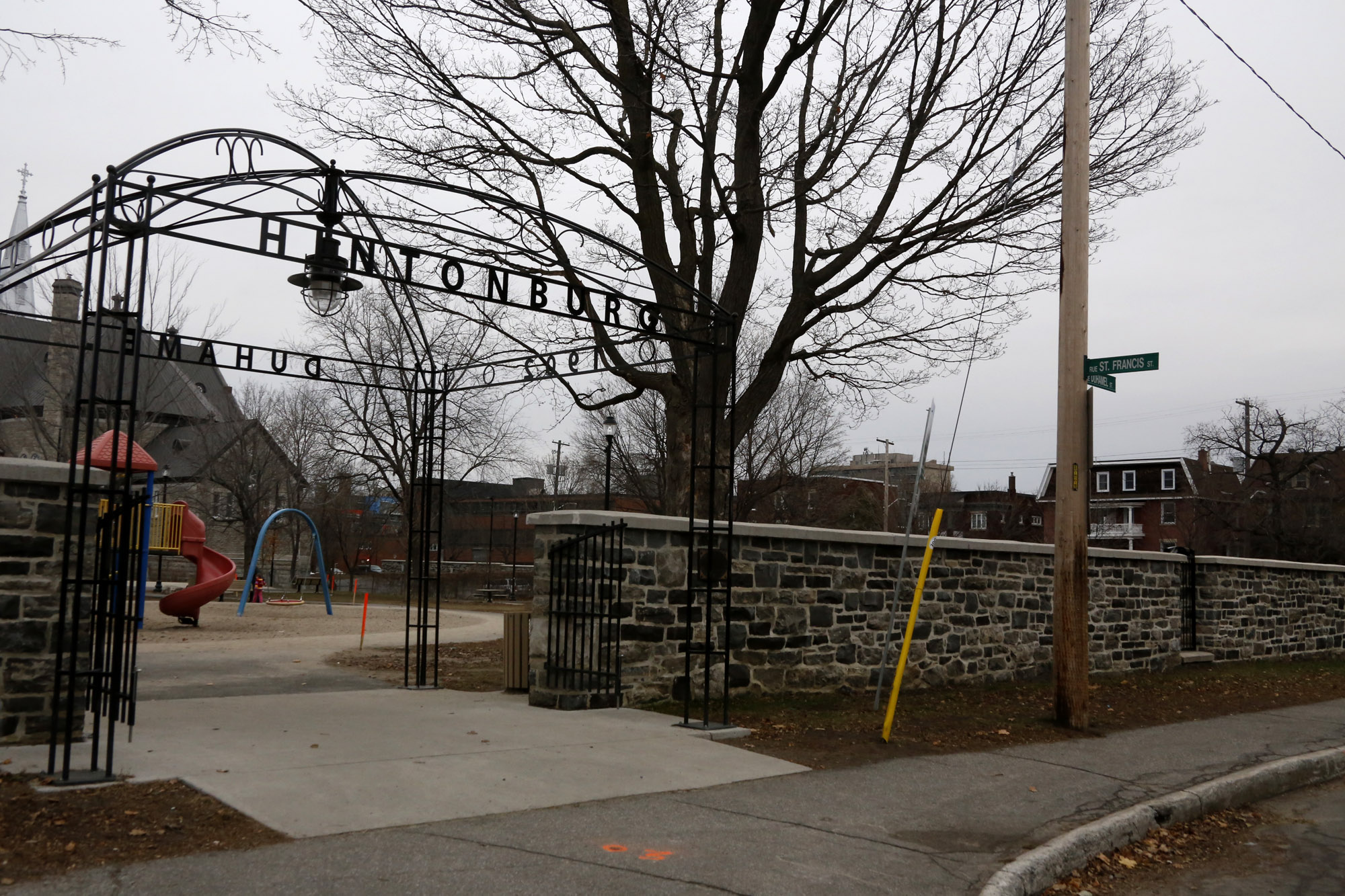 Hintonburg Park entrance, from St. Francis Street. The St. François d’Assise Church, in the background on the left, dominates the park. The wall was renovated in 2010. Photo: Stephanie Elliott 2014.

The Community Design Plan addresses transportation as well. It states that because of the grid pattern of the streets, and the presence of sidewalks on most streets, Hintonburg offers pedestrians and cyclists many route options. The CDP describes Wellington, Holland, and Scott as main arteries appropriate for cycling, and Armstrong and Spencer streets as routes within the community. However, as pointed out in the NP, the first three streets are much too traffic-heavy to ride without dedicated bike lanes. Proposals for dedicated and shared-use lanes are ongoing, but not yet implemented.

Socio-economic Sustainability: The Neighbourhood Plan presents Hintonburg as a socially and economically sustainable community, but one that needs some improvement. The community is ethnically diverse, and the area features a large mix of residential, commercial, and institutional uses. There are numerous social initiatives operated by the HCA, which increase connectivity in the neighbourhood, improve education around social issues such as drug use and crime, and offer activities for residents. Residents wish to encourage “independent, locally owned, community-minded businesses” in the area to foster community support and interest. The Wellington West BIA promotes and improves both the building stock and the types of businesses that settle along the main street. The NP highlights issues that need to be improved in order to achieve socio-economic sustainability: increased public safety, increased programming for children, and promotion of the Hintonburg commercial area.[vii]

According to the Community Design Plan, 47% of the land in Hintonburg is residential, and only 8% is commercial and office space. The large majority of the latter is located along Wellington Street, where 40% of the land use is commercial and office space. Approximately 13 662 people lived within the borders of this case study in 2006. The “number of dwelling units is almost evenly split between the areas north and south of mainstreet.” The CDP also states that, compared to the City, the community has lower unemployment rates, two times the number of people cycle to work, and there is a smaller income gap. The CDP discusses the projected growth in the community, and provides design goals to manage intensification and ensure that new developments fit the community.[viii] 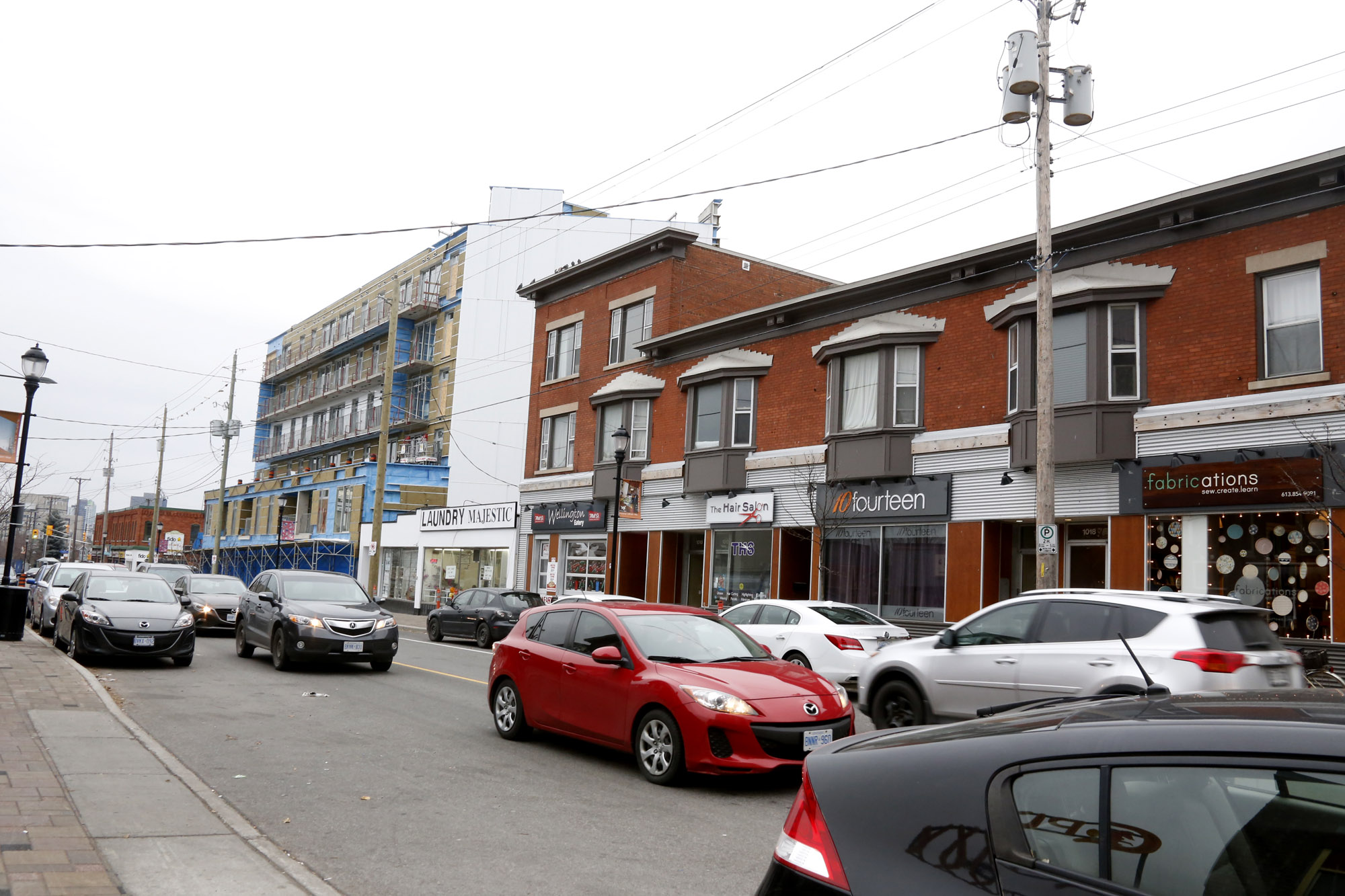 View of Wellington Street West from Fairmont Avenue looking southwest towards Irving Avenue. The Windmill development, The Eddy, is seen in construction on the left. Photo: Stephanie Elliott 2014.

Cultural sustainability:  The Neighbourhood Plan emphasizes the importance of arts and culture in the neighbourhood, and aims to re-brand Hintonburg as a centre for these activities in the City. In both the general text and in “Appendix 4,” the authors list the numerous festivals, events, and initiatives hosted by the HCA to include all community members. The NP also recommends further arts and culture efforts, including the adaptation of historic properties for artistic or cultural uses; creating space for public art; and promotion of community programming and events. The CDP does not directly address cultural sustainability, but the idea of maintaining the neighbourhood character and encouraging its development is present throughout the document. It is included in the design goals by encouraging sensitive intensification that works with the physical fabric of the built environment, as well as ensuring there are public spaces for daily use.[ix]

Impact of Intensification on Heritage Value:  Due to the commitment of the community to adaptive reuse, the major built heritage features of the neighbourhood are still intact and performing either commercial, service or residential functions. Most of the intensification projects are integrating with the existing fabric sensitively, as in the case of the École Sacré-Cœur, or are replacing buildings that do not contribute to the heritage value of the community, as in the case of Windmill’s Eddy Development at the corner of Wellington and Irving. Both types of development are being encouraged and required to submit designs which complement the surrounding character; for example, low elevations at the street, and somewhat taller towers in the rear of the properties.[x] 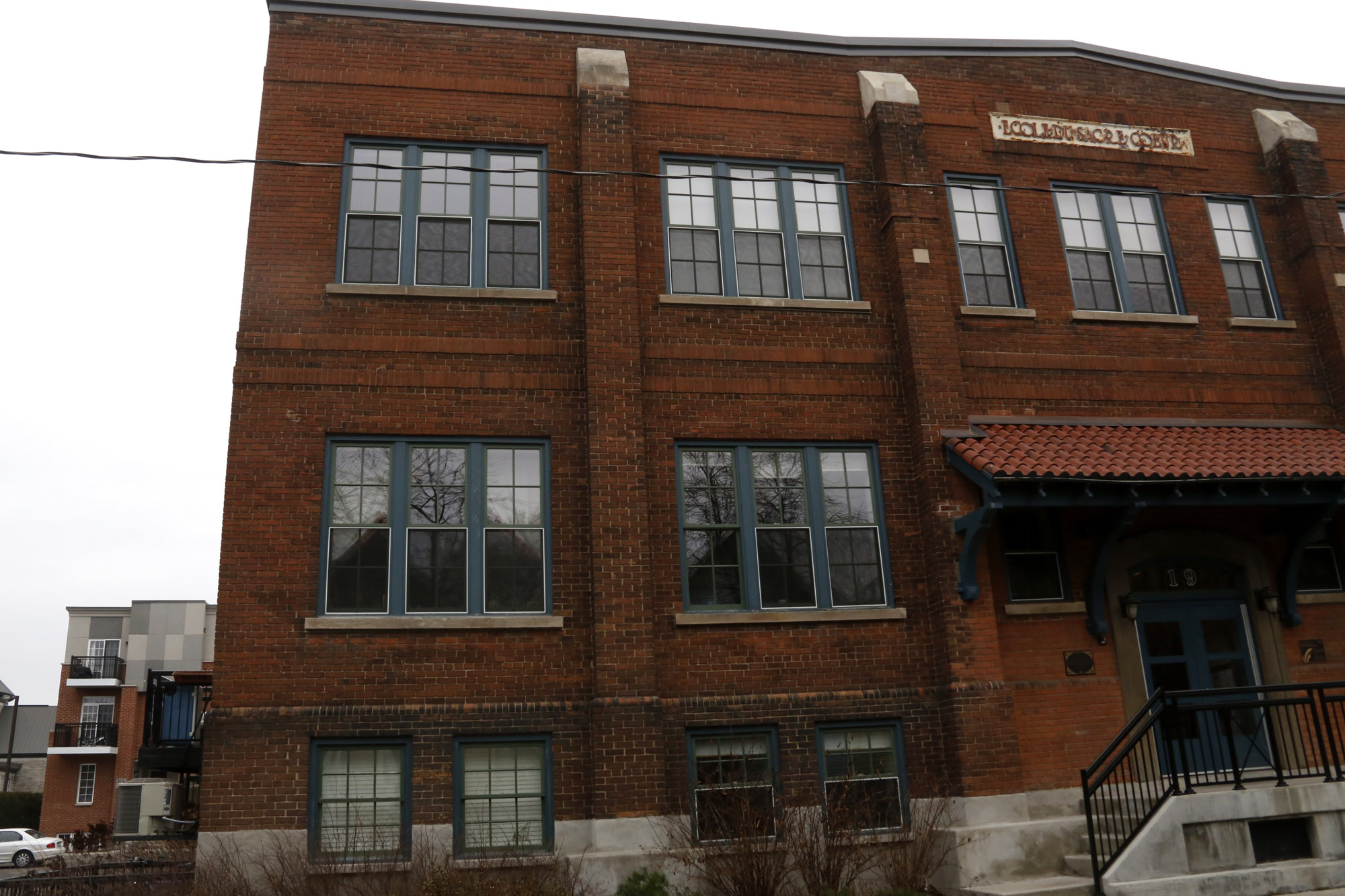 The former École Sacré-Cœur is an award-winning adaptive use project. Infill condos built to the rear of the main building can be seen to the bottom left (19 Melrose Avenue). Photo: Stephanie Elliott 2014.

Walkability, bikeability, and transit availability: “Walk Score”, a website that measures the walkability, bikeability, and transit availability in a community, lists scores for Kitchissippi, the City of Ottawa Ward that contains Hintonburg, Mechanicsville and Wellington West. Kitchissippi has a Walk Score of 94, a Transit Score of 84 and a Bike Score of 100.[xi]Adjusting for the study area of this paper, however, the Walk Score may be somewhat diminished. Hintonburg still does not have a major supermarket, as was highlighted in the Neighbourhood Plan and confirmed by a current resident,[xii] while Walk Score’s analysis includes stores that are west of Holland, in the Wellington West neighbourhood. Likewise, the Bike Score needs adjustment. According to residents and the city in the NP and the CDP, dedicated and shared bike lanes do not yet exist, however Walk Score states, “there are excellent bike lanes.”[xiii] Despite these adjustments, Hintonburg can still be said to have high walkability and moderately high bikeability.

Community sustainability: Catalina Turco’s “Pragmatic List of Domains and Dimensions of Community Sustainability,” developed in her 2009 article, provides a measurement framework for determining the sustainability of a community.[xiv]  Turco’s List (Table 1) presents six domains and twenty-eight dimensions of a sustainable community. Using these categories, Turco conducted surveys in three UK towns to discover how residents value these domains, their opinions of them. Since there has been so much community input in the Neighbourhood Plan and the Community Design Plan for Hintonburg, these documents can be applied to Turco’s framework to assess the Hintonburg’s sustainability.