LESSONS LEARNED  Victoria Island reflects a complex layering of industrial and indigenous heritage that collectively narrate the story of Canada’s early development. This heritage is attributed with different values and is expressed in different forms as tangible (Industrial structures) and intangible (Indigenous culture) constructs that require different approaches to their conservation. Numerous Industrial buildings have been designated as federally recognized heritage which informs and assures their preservation while additional indigenous led activities have been introduced to ensure the continuity of First Nations cultural presence on the island. Despite these efforts, the aforementioned are treated as isolated entities without formal recognition of the site as an integrated cultural landscape. More work needs to be done in preserving and celebrating the indigenous and industrial past of the Chaudière and Victoria Islands. The site needs to be addressed holistically with an all encompassing official heritage designation that balances indigenous and industrial heritage as inseparable parts of a diverse and multifaceted cultural landscape that together form a rich and fascinating narrative of Canada’s past.

DESCRIPTION Situated in the heart of Canada’s capital city in Ottawa, Ontario, Victoria Island is part of a cluster of islands that span the Ottawa River separating the provinces of Quebec and Ontario. The island is among four including: Chaudière, Albert, Amelia and Philemon (now a peninsula) all of which are organized around the Chaudière Falls, which has long been converted into a semi circular dam as part of a hydro electric complex. The islands are a testament to their industrial past with numerous abandoned industrial heritage buildings, a recently closed paper mill and power stations as part of the dam. Of the five islands, Victoria is the furthest south flanking the Ottawa river’s shore. The island is subdivided by the Portage Bridge. A second bridge, the Chaudière, defines its Western edge. Both connect the cities of Ottawa and Gatineau. While the other four islands are largely inaccessible to the public due to their private industrial occupancy and deteriorated state, Victoria Island is accessible as parkland. Additionally, Victoria island currently houses three federally designated heritage industrial sites, an operable hydro electric generating station, as well as a First Nation managed cultural attraction, which collectively reflect the dissonant heritage of the islands.

STAKEHOLDERS The Victoria and Chaudière Islands unique geographical location, size and complex history are responsible for an equally complex array of stakeholders with sometimes conflicting economic, political and social interests. Situated at the heart of the nation’s capital straddling the inter-provincial border between Quebec and Ontario, the islands span the Ottawa river separating the city of Gatineau and Ottawa in what is considered “Partnership Land” which ensures a shared federal, provincial and municipal governing presence. Additionally, the islands are considered part of the Census Metropolitan area of Ottawa-Gatineau which spans both the provinces of Quebec and Ontario.[3] Since 1966 the federal governing body known as the National Capital Commission (NCC) has acquired ownership of most of Victoria Island through expropriation. [4] The NCC, who helps oversee the planning, development, conservation and overall improvement of Canada’s Capital Region, considers Victoria Island as a National Interest Land Mass which is assigned to properties that are identified as being symbolically meaningful as a crucial part of the NCC’s long term aspirations for the Capital region. [5] The NCC leases some of the industrial properties on the island to various commercial enterprises including a rock climbing gym known as Vertical Reality and until recently, the Ottawa-Hull Naval Association which occupied the Office of the Bronson Company which ,according to the NCC, is soon to be leased to members of the Algonquin First Nations. (I. Badgley, personal communication, Jan 8, 2015).   Turtle Island Tourism Company occupies the far east portion of the island with its tourist attraction known as Aboriginal Experiences.[6] The only remaining private land ownership belongs to Ottawa Hydro to carry out its hydroelectric operations.iv Energy Ottawa owns and operates the facilities as an affiliate of Ottawa Hydro which is owned by the City of Ottawa. Questions of land ownership remain the most contentious issue with Algonquin First Nations laying claim to the island as unceded and unsurrendered Algonquin territory. They maintain that no treaties were ever signed and that the NCC have not been able to produce documents to demonstrate otherwise.

The Victoria and Chaudière Islands represent a vital part of Canada’s history. As a major economic and industrial center that spurred the early development of the nation born out of the early interactions between the land and the founding French, British and Native peoples, it may be appropriate to consider the Chaudière and Victoria islands as ‘The Cradle of Canada’. As an extension of this thought, even their geographical location as an ancient sacred indigenous site set within the Ottawa River in between Ontario and Quebec, symbolically and physically unite the French, British and First Nations while under the watchful eye of the Peace Tower. It may be argued that there is no other location in Canada that better embodies the history, culture, accomplishments, and aspirations of this nation. It is the story book of Canada and its story needs to be told. The pages of this story are etched in the landscape, the industrial relics and the indigenous memoirs of the Victoria and Chaudière Islands.

Industrial Heritage Victoria Island features three federally designated industrial heritage sites. The Parks Canada Agency and the Federal Heritage Buildings Review Office oversee the conservation efforts setting out a framework of policies, standards and guidelines as a means to protect the buildings heritage character.[7] The following designated heritage resources were assessed on the basis of their Historical, Architectural and Environmental value as described in the Canadian Register of Historic Places statements of significance. It is note worthy that while the contextual value of these buildings is understood, as expressed in their environmental assessment, the designation is restricted to the buildings footprint . The treatment of heritage resources as entities independent of their context limits the capacity in which their narrative can be understood and effectively conserved. 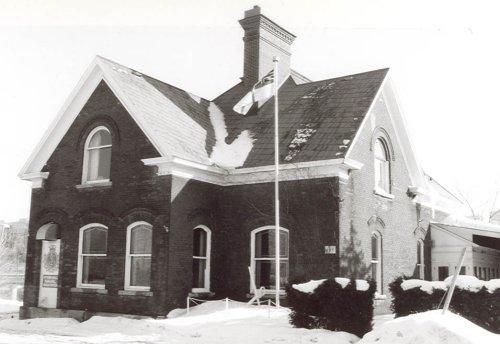 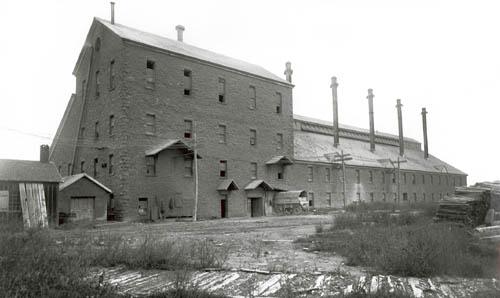 General view of the Carbide Mill. Retrieved December 6, 2014 from http://www.historicplaces.ca/en/rep-reg/image-image.aspx?id=4634#i1 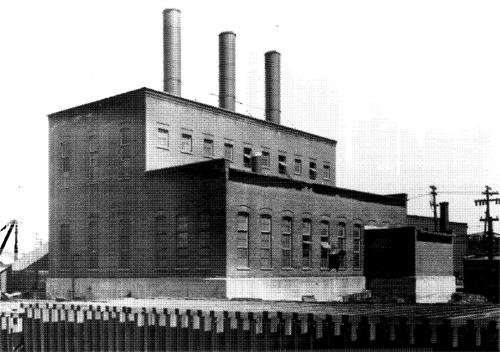 First Nations Cultural Heritage The Chaudière and Victoria Islands are deeply rooted in the history, values and cultural traditions of the people of the Algonquin Nation. As intangible heritage, the conservation of the values associated with Islands is dependent on the continuation of their cultural traditions, memories and stories. The Chaudière Falls and the adjacent islands, known to the Algonquin people as Akikpautik, have a long history of indigenous occupation. Archaeological evidence suggests that it has been a meeting place for aboriginals from across North America for thousands of years. As nomadic people, they used water ways and portage routes as a means of passage. The Akikipautik and the Ottawa river was once such a passage, linking Dows Falls to the Chaudière islands. In passing by canoe, is it said that these Indigenous peoples would pay tribute to the falls with prayer, for it was considered a sacred spiritual site. Long before the construction of the semi circular dam that has replaced the natural condition of the Chaudière Falls, its grandeur was considered second only to Niagara Falls. It is said that the falls would produce a howl that the indigenous interpreted as the messages sung from the womb of the mother earth and its constant mist was thought to transcend the prayers of the people to the great creator. To the Indigenous people, the Akikipautik symbolized the bowl of the sacred pipe and the place in which the wheel of life would spin.iii And so this sacred site was the place of many ceremonies as was documented by one of the area’s earliest explorers, Samuel de Champlain as he wrote:

Having carried their canoes to the foot of the fall, they assemble in one place, where one of them takes up a collection with a wooden plate into which each puts a piece of tobacco. After the collection, the plate is set down in the middle of the group and all dance about it, singing after their fashion. Then one of the chiefs makes a speech, pointing out for years they have been accustomed to make such an offering, and that thereby they receive protection from their enemies; that otherwise misfortune would happen to them.[11]

Despite the extensive industrialization of the islands and the damming of the Chaudière falls, the site remains, as it did for thousands of years, a sacred site for indigenous groups across the country.

Industrial Conservation Efforts While much of the industrial fabric of the Victoria and Chaudière Islands has been lost, the few relics that remain are being conserved following three different approaches: Restoration, Repair, and Reuse. In all three cases the projects inherently demonstrate many key principles of ecological sustainability as outlined in Jean Caroon’s book Sustainable Preservation: Greening Existing Buildings. In the first chapter, Historically Green – What Makes Existing Buildings Green, she described the many sustainable features typical of heritage structures which will be briefly explored as they apply to the conservation efforts described below.

Through reuse, restoration or repair, these conservation efforts all demonstrate their capacity to reduce carbon emissions by maximizing their existing embodied energy. By extending the life and functional capacity of these buildings they offset the need for new construction which would require the energy intense processes of extraction, production and construction which these buildings have already undergone. xii Despite what method of conservation was employed, all four buildings address issues of sustainability while also ensuring the continuation of their industrial legacy.

Sustaining Indigenous Culture on Victoria Island: In the decades following the height of industrialization, First Nations people began to return to the island in the 1960’s to practice cultural traditions and hold various gatherings. In this time, elders would host sweat lodges, healing ceremonies, workshops and annual solstice and equinox pipe ceremonies. The grounds were also host to various political encampments and demonstrations which saw the gathering of First Nations people from across North America. In the last 15 years two initiatives have been undertaken in an attempt to conserve the indigenous heritage of Victoria Island and continue the momentum of the site’s active role in First Nations cultural traditions.

Projects such as Aboriginal Experiences and the vision of an Asinabka National Indigenous Centre demonstrate a growing dialogue concerning the need for an official Indigenous presence on Victoria Island. Indeed, according to Archaeologist Ian Badgley and Analyst Tammy McEnroe with the National Capital Commission, there has been increasing emphasis and interest in First Nations issues within the organization in the last 10 years. Unlike the industrial relics that are scattered across the islands, this progression is hard to measure as tangible evidence, but it is indication of a growing movement towards indigenous cultural renewal.