The Sustainability of Modernist Heritage at Vincent Massey Park, Ottawa

PRESENTATION: This information was presented to the class on November 21, 2017. It represents a summarized, 10 minute version of the research done for the case study.

DESCRIPTION: Most of the historic information on Vincent Massey Park is found in the 1993 study by Edwinna Von Bayer. Copies of this report are located at Carleton University’s Ottawa Resource Collection as well as the ‘Ottawa Room’ in the main branch of Ottawa Public Library. Information gathered in the table below was accessed through this report.

Vincent Massey Park, located southwest of downtown Ottawa and directly adjacent to the Rideau River, and across from Carleton University, is named after the first Canadian-born Governor General of Canada, The Right Honourable Vincent Massey. His son, Hart Massey, designed the award-winning pavilions for the opening of the park in 1958. These include a bus shelter, a concession building, washrooms and an entrance pavilion. Ten years after the park was opened, a new pavilion, the “centennial bandstand” was introduced to the park. 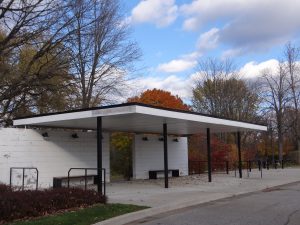 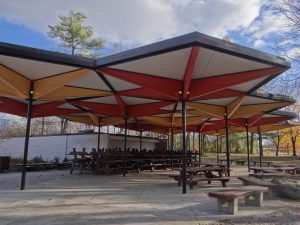 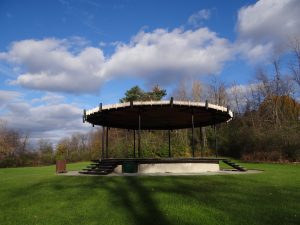 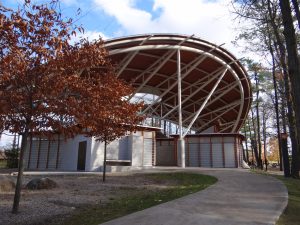 The washroom building was eventually deconstructed and replaced by a large beech leaf shaped structure, serving its original purpose as washrooms. Deconstruction refers to the disassembling of a building, so as to use it in another project. Signs are placed as educational and visual guides to understand the history of the park, and to inform the public about sustainable design initiatives.

The term ‘biophilia’ was coined by an American biologist, author and researcher Edward O. Wilson in 1984. He defined it as “the urge to affiliate with other forms of life” (Wilson, 1984). Today, ‘biophilic design’ refers to “…the deliberate attempt to translate an understanding of the inherent human affinity to affiliate with natural systems and processes… into the design of the built environment.” (Kellert, 2008) Since the term was first introduced in 1984, Hart Massey’s structures had not been referred to as biophilic, but possibly instead ‘organic’.

The Oxford Dictionary of Architecture loosely defines ‘organic architecture’, explaining that it has been used to describe so many contradictory styles that it may as well not be defined. However, the main associations of the term are linked to a natural order of design, evolving without an imposed, predetermined plan (Curl and Wilson, 2015).

“…Ottawa’s park system was strongly shaped by the presence and activities of the Ottawa Improvement Commission and the Federal District Commission – federal government bodies responsible for development and maintenance of lands and buildings on federally-owned land in the national capital region” (Von Baeyer, 1993). 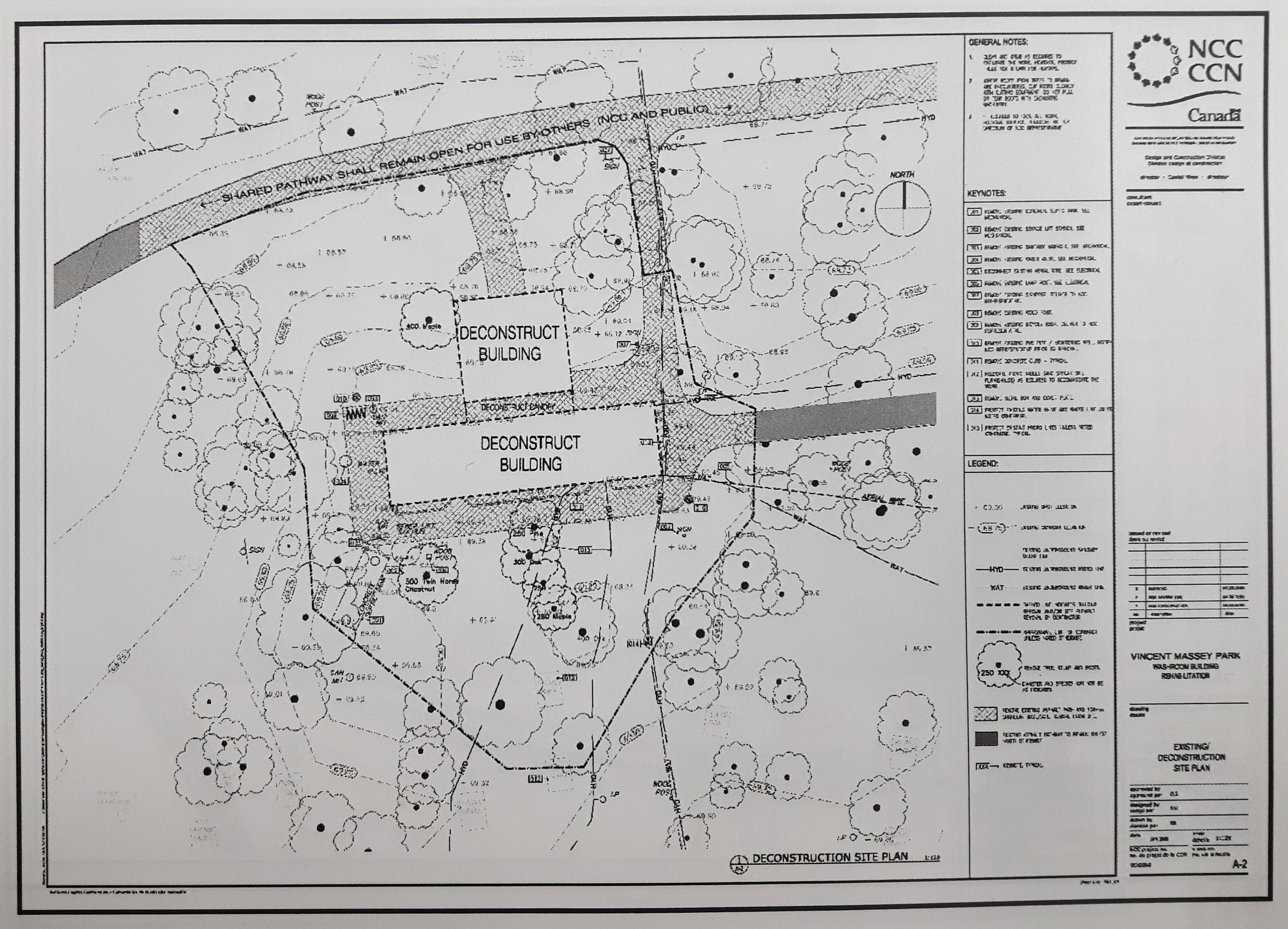 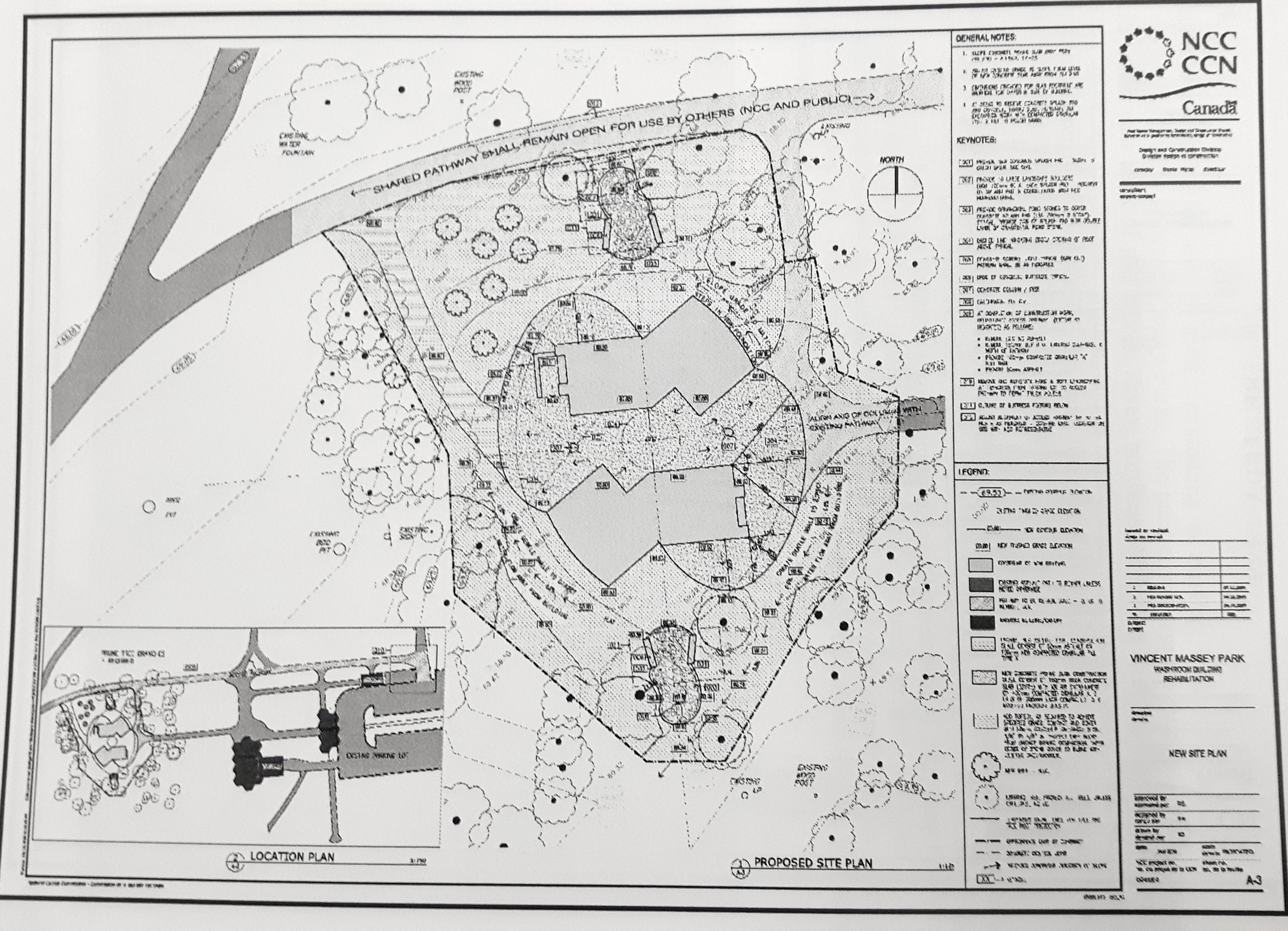 The Ottawa River rivershed is the unceded territory of the Algonquin Anishinaabe.

The park is used by a wide variety of Ottawa residents today, including:

Natural heritage: The city beautification plan and Greber plan introduced in 1903 and 1950, respectively, were important planning projects undertaken by the city of Ottawa. The planning that led to the creation of Vincent Massey Park is still intact and visible in the park to this day. Apart from a rise in planting of native trees and shrubs in the 1990s, no other dramatic changes have been made.

Cultural heritage: This includes the buildings and site design, the historic associations and uses of the land to celebrate indigenous connections.

“Architect Hart Massey designed the building as a pure, uncompromised expression of his ideals as a modernist. As such, it is a very good example of his work. It was undertaken early in his career, and was widely published having been among the grouping of four park buildings awarded a silver medal in 1958 from the Massey Awards for Architecture, the highest architectural honour at that time.” (Parks Canada, 2008)

As mentioned previously, the park is today also used for the Summer Solstice festival, which celebrates indigenous cultures. While the NCC allows permits for whomever wants to hold their events at the park, there are hardly any events ever observed at the park apart from the Summer Solstice festival. This is significant in pushing forward an affirmative position for the indigenous cultures that reside in Ottawa.  (Wilson, 2014)

Environmental Sustainability: Historically the land had been cleared of much of its tree population. However, Vincent Massey Park has retained most of its natural environment since its official opening in 1958. In this way, the park continues its original vision from the implementation of the Gréber Plan. The modernist pavilions from 1958 were constructed with sustainable ideals in mind. “The contractors bidding on the buildings were advised that ‘special attention must be paid to preservation of trees and other natural features’” (Von Baeyer, 1993, 33).

The new washroom buildings introduced to the park in 2012 are a key element of the current approach to sustainability. Features in the design include

Livability (Socio-environmental sustainability): The pavilions interact with the surrounding environment in a way that bridges the built and natural world through their biophilic design. 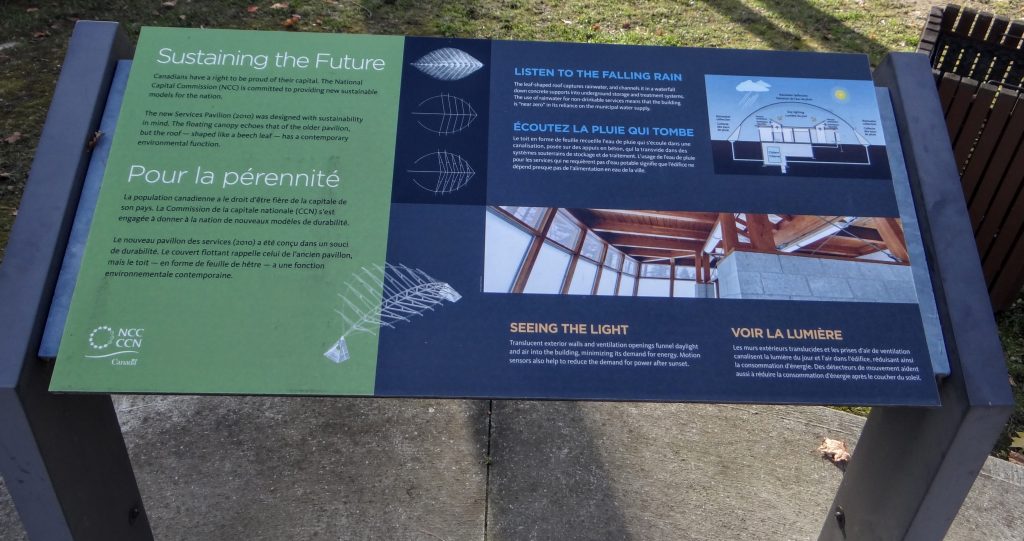 Image above shows the sign placed in front of the new washroom building. Photo by Sampoorna Bhattacharya, taken in November 2017.

Social sustainability: The bike paths through the park give cyclists, roller-skaters, pedestrians etc. a refreshing break from the busy and loud city. The bike paths provide easy access to other nearby parks such as Mooney’s Bay and Hog’s Back falls. The ability to easily walk between a beach, a waterfall and a quiet forest-like area invites people to the park.

MEASUREMENT: Assessing the Net-Zero energy of the new washroom building, the biophilic design of all structures, the heritage conservation through rehabilitation and deconstruction and the overall architectural achievement of the park structures will further our understanding of the park’s present status.

Zero Energy Certification through International Living Future Initiative: Net-Zero accreditation can be achieved through certification using a measured system managed by the International Living Future Institute (ILFI) known as “Zero Energy certification”. The new washroom building has passive ventilation, natural daylighting as well as rainwater capture and use. The building is not heated, does not use electric lighting during the day and uses motion sensors for light at night. These are all features that count towards Zero Energy certification, although more extensive measurement must be done in order to fill the criteria and evaluate the building (ILFI, 2017).

LEED: An unpublished information sheet from the NCC outlines the sustainable features of the new washroom project. These features line up well with the LEED criteria for certification, which include categories titled Location and Transportation, Sustainable Sites, Water Efficiency, Energy and Atmosphere, Materials and Resources, Indoor Environment Quality, Innovation and Regional Priority (USGBC, 2016).

The information in the sheet is summarized and arranged in the table below:

The Six Biophilic Elements and their Attributes: The ILFI also recently, in 2017, initiated the ‘Stephen R. Kellert Biophilic Design Award’. The award criteria include integration, expression, experience and evaluation of biophilic design. The six biophilic elements, environmental features, natural shapes and forms, natural patterns and processes, light and space, place-based relationships and evolved human-nature relationships must also be clearly present in the work, with each element supported through four attributes. These attributes are listed in detail in the first chapter of Kellert’s book, Biophilic design: the theory, science, and practice of bringing buildings to life, titled “Dimensions, Elements, and Attributes of Biophilic Design”. The table below displays Vincent Massey Park’s outcome in the fulfillment of the six biophilic elements.

“Massey’s hexagonal tree-form canopies have been carefully restored, and repainted in their 1950s orange and red colour scheme. A highly acclaimed modernist masterwork has been restored.” (Edward J. Cuhaci, n.d.)

The National Capital Commission intervention in the park was of the deconstruction of the previous washroom buildings and the addition of the large, beech-leaf shaped washroom won the ‘2012 City of Ottawa Architectural Conservation Awards’ award of merit for adaptive use. 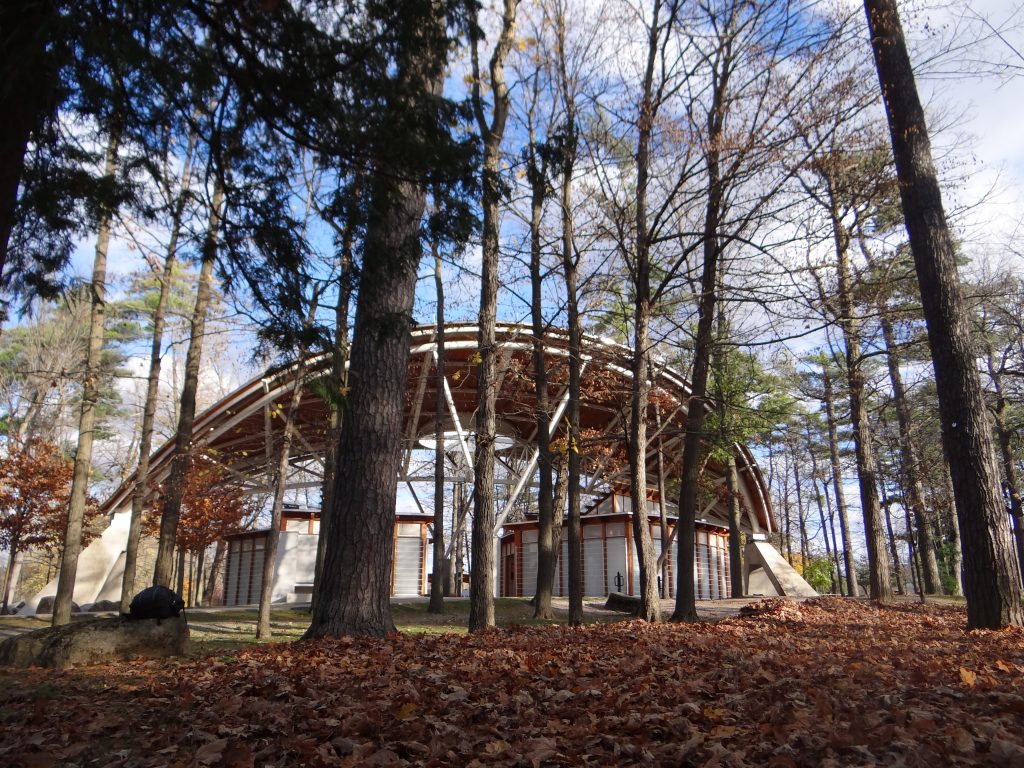